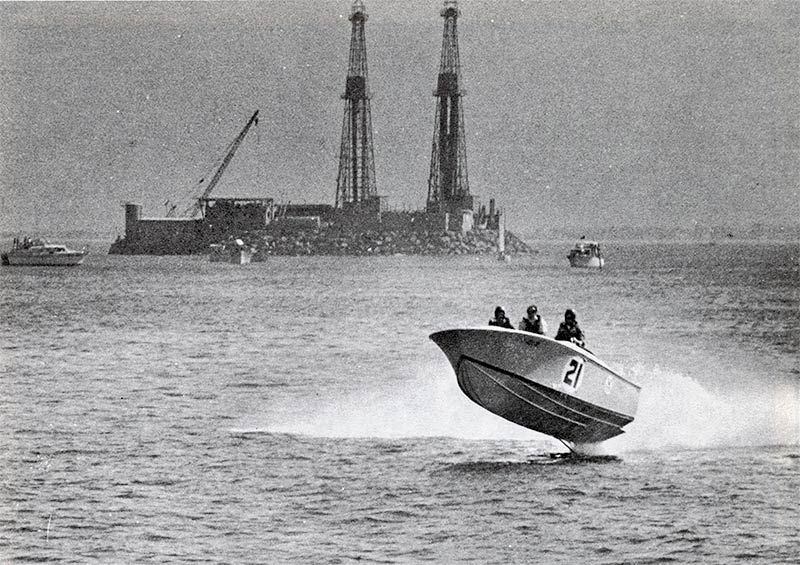 THE LONGEST AND MOST CHALLENGING offshore power boat competition ever held, the Long Beach-San Francisco Race, was won by Thunderballs, a 233 Thunderbird-Formula, driven by co-owners Peter Rothschild and Larry Smith. The 430-mile course running up the rugged California coast covered some of the most feared water in the world. Two other boats out of a starting fleet of 9 finished the awesome run. Surf Rider, famous for her many victories including overall honors in the 1964 Cowes-Torquay Race, was second driven by Bob Nordskog. Alimony III, a sister Bertram 31 to Surf Rider, was third, driven by Jack Jenkins. The winning time was 11 hours, 25 minutes, 57 seconds.

The race began at 7:30 a.m. Friday, October 28th, with 9 out of 12 registered starters at the line. Thunderstruck, a new boat, never quite got together. NKKI II had her engine stolen two days before the race. Lucky-B was scratch – at the last minute because of crew injuries. Shortly after the start, Zippe, a 25’ Bertram driven by Dick Bertram, began acting up and by the Pt. Dume check point, some 40 miles after the start, was 45 minutes behind the fleet. Zippe finally had to leave the course with transmission trouble.

By the time the leading boats reached Santa Barbara, 90 miles after the start, a four boat battle was shaping up. Thunderballs was first, followed closely by the 32’ aluminum boat, Big Broad Jumper, driven by Bill Wishnick, the new and powerful 28’ Donzi Patty Lou, driven by Bob Rautbord, and the never raced Lil’ Maltese Magnum driven by Don Aronow. Less than 10 minutes separated the first and fourth boats. Remaining competitors were in the order of passing: Surf Rider driven by Bob Nordskog, Alimony III driven by Jack Jenkins, Channel Clipper driven by Beau Weill and Pioneer driven by Bill Cooper. Pioneer was forced to limp into Santa Barbara suffering from transmission trouble. After an unsuccessful attempt to make repairs, Cooper had to discontinue the race.

Now there were seven and the Pacific Ocean was beginning to show some strength. By the time the racers rounded Pt. Conception, large rolling seas of 15 feet were standing boats on their transoms. It was in these waters, known as the “Grave Yard of the Pacific,” that the larger Big Broad Jumper captured a slight lead over Thunderballs. The fleet began to string out on the immense seas.

Big Broad Jumper continued to lead up the coast, her rough water capabilities making her look like a sure winner into the lay-over port of Morro Bay. But, alas, there had been a slight miscalculation and 16 miles short of refuge Big Broad Jumper sputtered to a stop — out of gas! Thunderballs, close astern, smashed on to be first into Morro Bay covering the 230 rugged miles in 5 hours, 28 minutes, 27 seconds. Second boat to Morro Bay was Don Aronow’s Lil Maltese Magnum (6 hours 11 minutes, 52 seconds).

The morning of Saturday, October 29th, was ideal for starting the race’s second leg. Sunshine broke through patchy fog which enveloped Morro Rock — halo manner. Six boats lined up for the dash out Morro Bay breakwater — Big Broad Jumper was disqualified the day before because of accepting a tow. By the time the fleet had reached San Simeon harbor, at the foot of the famed Hearst Castle, two more boats were in trouble. Lil’ Maltese Magnum was having outdrive trouble and Channel Clipper had lost compression. Both boats, powered by a pair of usually reliable Volvo outdrive units, were forced to discontinue.

A four boat fleet was left. Thunderballs led all the way. The first three boats, Thunderballs, Surf Rider, and Alimony III, were only 5 minutes apart at Monterey. Patty Lou, lagging behind slightly had to put into Monterey harbor to drop off her owner, Bob Rautbord, because of a back injury. The boat carried on with navigator, Phil Caricof, at the wheel. Moderate seas were kind to the battered crews.

However, as the ocean relaxed the fog became more intense. By the time the fleet reached Pt. Ano Nuevo, 60 miles from the finish, the crews were unable to see the bows of their boats, much less the treacherous rocks that line the coastline. Only by careful and superb navigation were the crews able to clear the area without damage to the boats.

Fortunately, the fog was of a local nature and the boats soon broke out of the gray peril into bright sunlight and smooth seas. Thunderballs took off, displaying the speed she is noted for. She covered the last 30 miles of the course averaging better than 53 m.p.h., dashing under the Golden Gate Bridge to finish in front of the St. Francis Yacht Club 5 hours, 57 minutes, 30 seconds after leaving Morro Bay. Alimony III was able to beat Surf Rider to the finish line by 29 seconds but had to settle for 3rd place overall as Surf Rider’s total elapsed time was some 1 hour and a half less for the total course.

Patty Lou, battling all the way, was forced to discontinue the race after losing a rudder and engine just south of Halfmoon Bay. Here she stopped to await a tow the next day. Patty Lou was the last representative of the East Coast offshore fleet. She regained her honor Sunday as the race participants sat at a brunch and trophy presentation at the St. Francis Yacht Club. As if purposely planned, she was spotted passing under the Golden Gate just as ceremonies began. Recess was taken and all on hand cheered her as she was towed, her crew pulling her by hand the last few feet across the finish line in front of the Club.

The winners, Larry Smith and Peter Rothschild with crewman Chuck Daigh, won the elaborate Valvoline Trophy and $6,500, largest winning purse ever given in offshore competition. They also won the Morro Bay Trophy for first boat to enter Morro Bay harbor and the Western Airlines Trophy for first boat under the Golden Gate Bridge. It was a conclusive finish. It was a West Coast finish in a sport which has been dominated by Eastern sportsmen. It was a small boat finish with emphasis on preparation and driving skill rather than cash outlay.

The Long Beach-San Francisco Race is destined to be an offshore classic. The course presents every challenge imaginable to boat and crew. Because of its coastwise nature, the race lends itself to spectator participation like no other offshore race in the world. The warmth and enthusiasm of the people of Long Beach, Morro Bay, and San Francisco are second to none.

October 1967 will see another great Long Beach-San Francisco Race take place and it is hoped that entries will include international participation. 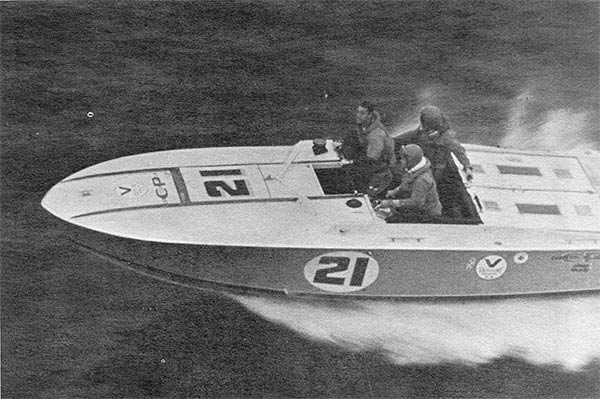 THUNDERBALLS, overall winner of the Long Beach to San Francisco Race, driven by Peter Rothschild. The boat is a Thunderbird-Formula 233 hull powered by a single supercharged 427 cu. in. Holman-Moody engine. Her simplicity, speed, and sea handling ability have given her crew wins in three major U.S. races and West Coast driver Rothschild the A.P.B.A National High Point Offshore Driving Championship for 1966. 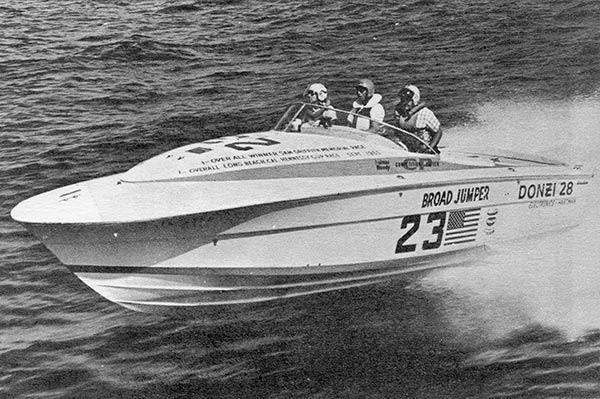 BIG BROAD JUMPER did well until she ran out of gas just short of Morro Bay. 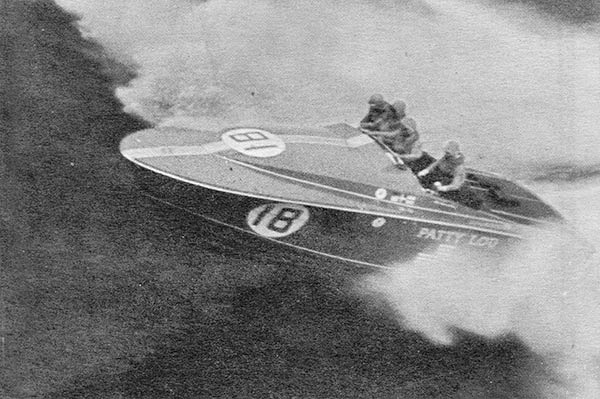 PATTY LOU, a new Holman-Moody powered 28′ Donzi, did well in the Long Beach to San Francisco Race until she lost an engine and rudder just 40 miles from the finish. Owner-Driver Bob Rautbord should be proud of her performance, for she is apparently the fastest offshore boat currently competing. She has done 73 m.p.h. on a measured course.