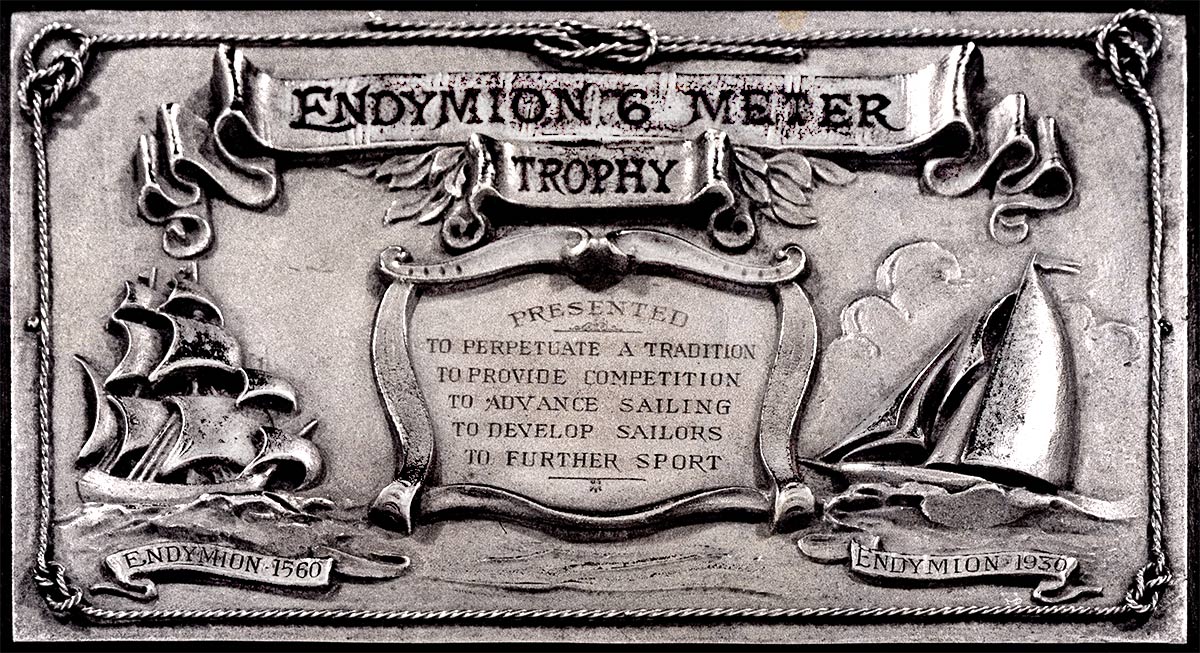 As the trophy chair from 2018 to 2021, so far…I am still hanging in there, I have scanned the photos of all the trophies that SCYA is responsible for. I am beginning to scan the Deeds of Gifts. The deeds are a wonderful history of yachting in Southern California. They hold a history of the classes sailed during various eras and decades. The trophy binders also have handwritten sheets listing the winners. Most of the deeds were donated to a specific class, such as this one for the Six (6) Metre class or our Kettenburg 32 Class trophy. Most deeds allow SCYA to manage what classes they are to be handed out to as classes move in and out of popularity. 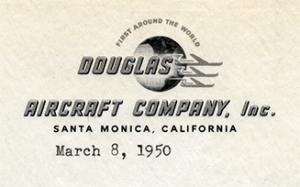 This article is about one trophy, the Endymion Trophy donated by Donald W. Douglas. I chose this trophy to highlight because we have a letter from Douglas typed on the letterhead of Douglas Aircraft Company and it holds his signature. I have prepared a set of notes from the original Deed from 1931 and an image of the letter declaring that SCYA can change the classes as the Directors see fit, written in 1950.

Notes from the original Deed of Gift:

For the purpose of promoting and advancing in interest in racing yachts of the Six (6) Metre Class, International Rule Rating, the undersigned has offered in competition a perpetual challenge trophy to be known as the “Endymion Trophy.” The following are declared to the terms and conditions regarding competition for the tenure of the trophy:

1.The trophy shall be a perpetual challenge trophy held in trust by the Southern California yachting Association, for yachts of the Six (6) Metre Class. It shall never become, under any circumstances, the property of any Club or person.

The trophy was, at first dedicated to be handed out during SCYA’s Summer Regatta in Southern California waters.

5. Each annual contest shall consist of one race. Each race shall be sailed over a course of Twelve (12) nautical miles, or as near thereto as the Regatta Committee of the Southern California Yachting Association deems practicable.” 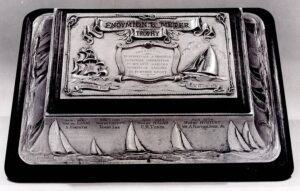 Endymion Trophy in the configuration when Donald W. Douglas donated it.

The races were sailed under the North American Yacht Racing Union rules in effect at the time. Mr. Douglas, in the deed, empowered SCYA to make changes as necessary to keep the trophy in circulation beyond the conditions present in 1931. Such as this statement about the rules in effect;

…other rules as may supersede the same and is recognized and in general use by majority of the leading Yacht Clubs of the United States.

This statement has allowed SCYA to continue to make the changes so that it can “present the trophy every year.” Also, if the Six Metre class ceased to garner large enough of a fleet Donald included this:

12. Should the Six (6) Metre Class, or interest therein, cease to exist, the Southern California Yachting Association, or its successors, shall provide for continued competition of the trophy by yachts of such class or type as shall appear to it best calculated to carry out the wishes of the undersigned donor under the terms of the Deed of Gift.”

Even though the Deed was clear that SCYA had the power to “provide for continued competition of the trophy”, SCYA wrote Mr. Douglas every time they made a change for 39 years. The trophy binder has copies of all of these, except for the 1970 letter which is the original letter on his eggshell paper letterhead. The image of the letter is below, note that it was signed by him. When I found this letter in the binders, I realized how historically important these records are. I made a request for a fire proof container for the binders. SCYA, and all of you, can know that these wonderful records of years of racing history around Southern California are safer.

Just think about how much history is lost today with all of us utilizing digital files and emails which just get lost in the shuffle and not kept for posterity. Hmmm…..

In 1984 the trophy was redeeded for the PRINCE OF WALES  Area J, which is where it is still presented today.

Donald W. Douglas, Jr. also a competitor in the 1928 Olympics, would later compete in the Transpacific Yacht Race from Los Angeles to Honolulu. Part of the 1953 winning crew on the 161-foot schooner, “Goodwill,” Douglas would win the Transpac again in ‘59 as the Sailing Master. His father, industrialist Donald W. Douglas, Sr. (of Douglas Aircraft fame), was Vice- Commodore of SCYA in ‘34 and Commodore in ’35 and‘36. 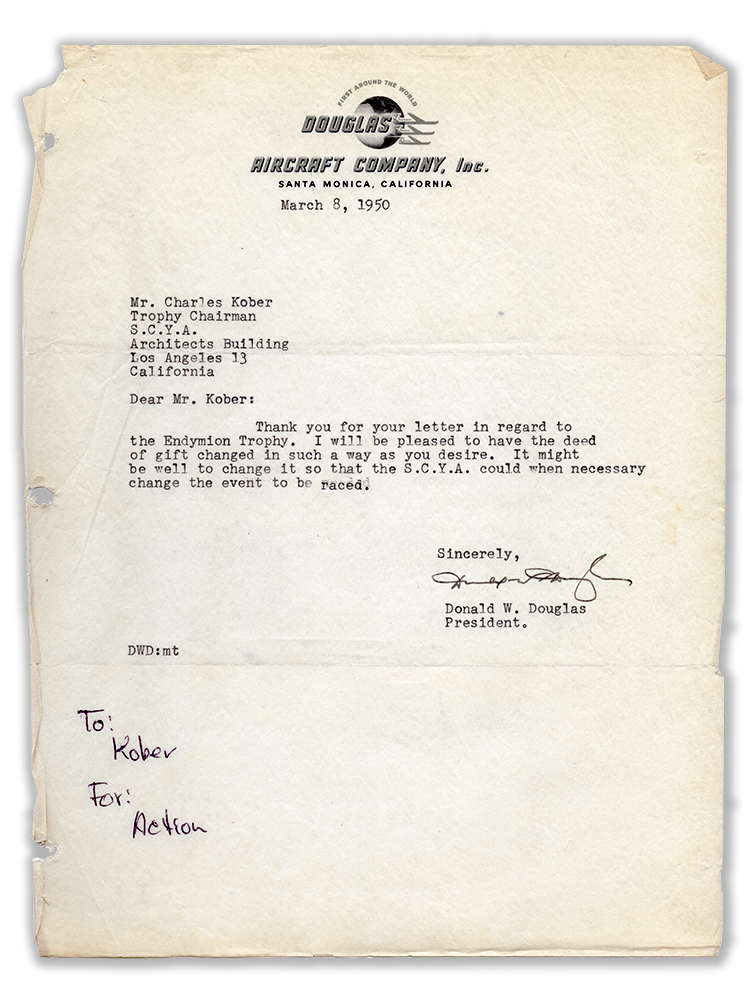