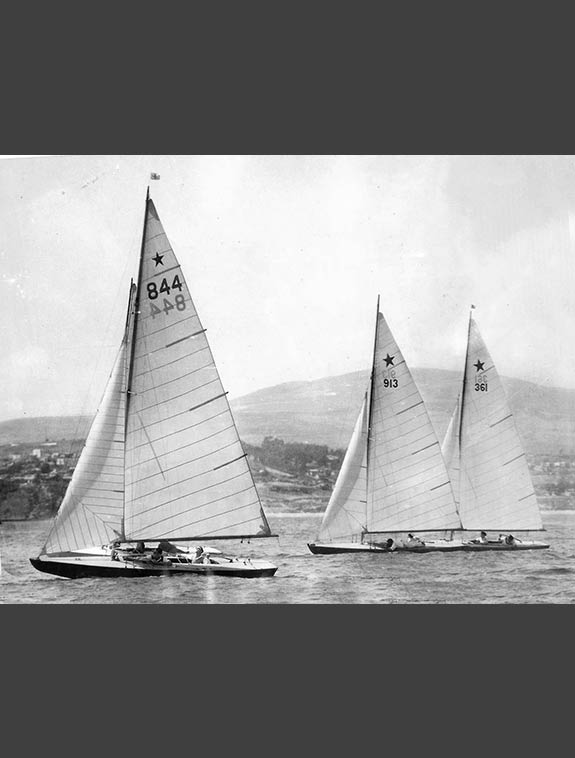 Olympic Racing of the 6 Metre Star Boat Class Under Way

Sailing over the waters of the Marine Olympic Stadium, Long Beach, California* are shown 6 metre Star Boats shortly after the start of their event of the Xth Olympiad. Photo shows # 844, “Holland” of Holland; # 913, “Windor” of Canada; and 361 “Joy” of England, just after the Start. (Printed on the back of the photo by the Los Angeles Bureau, ACME Press)

In 1932, financial times were extremely difficult with the beginning of the great depression a few years earlier. Originally, the Los Angeles Olympic Committee decided that events which could not generate revenue for the Xth Olympiad would not take place, this would include the sport of yachting. Notwithstanding, Southern California Yachting Association convinced this Olympic Committee to retain yachting in the games. Conditions were attached to the agreement. SCYA was to cover all costs of yachting and take control over the sport. Also, they were to provide race boats for those countries who could not afford to ship their own to Los Angeles. The California Yacht Club was instrumental in providing boats to these struggling countries.

The Canadian Sailing Team is just one example of many that competed regardless of the varied difficulties participating countries faced in getting their athletes to the 1932 Olympics. Another example was the Royal Vancouver Yacht Club whose members were able to sell an engine from a tugboat to provide the funding (gas & food) to make the journey down to Los Angeles while camping roadside.

The Canadian yachting team, in a borrowed 8 metre Star Boat, won a 2nd place silver medal with Ronald Maitland at the helm, behind the United States 1st place gold finish, with Owen Churchill at the helm, in that same 8 metre class. Regrettably, with too few competitors, a 3rd place bronze medal was never awarded in the 8 metre Star class which was attributed to the financial burden of travel for athletes during the great depression. The Start class was won by the United States with Gilbert Gray at the helm.

* The sailing venue was actually held outside the Port of Los Angeles, past Angeles Gate Light in the lee of Point Fermin. The hills of Palos Verdes are visible in this photo. The Marine Stadium was built to host the rowing events. The stadium was the first manmade rowing course in the USA.