This is an introduction article from the 1967 SCYA Yachting Yearbook, page 3. It is so relevant today, that we thought it would be the way to “explain” what SCYA really is. In short, it is the clubs and their people involved in the Association working to make the sport of boating better. Take the numbers presented here in 1967 and add FIFTY FOUR more years (in 2021), then add up the numbers presented. MIND BOGGLING, right? So, the next time you go out to race or to sail the local waters, take a moment to consider why it is so easy for you to go. It is the people of SCYA still working for YOU.

*2021 editor changed “men” to “men and women” to better indicate the true facts and the changes in the sport over time.
Maybe they were all men in 1967, but not for long! 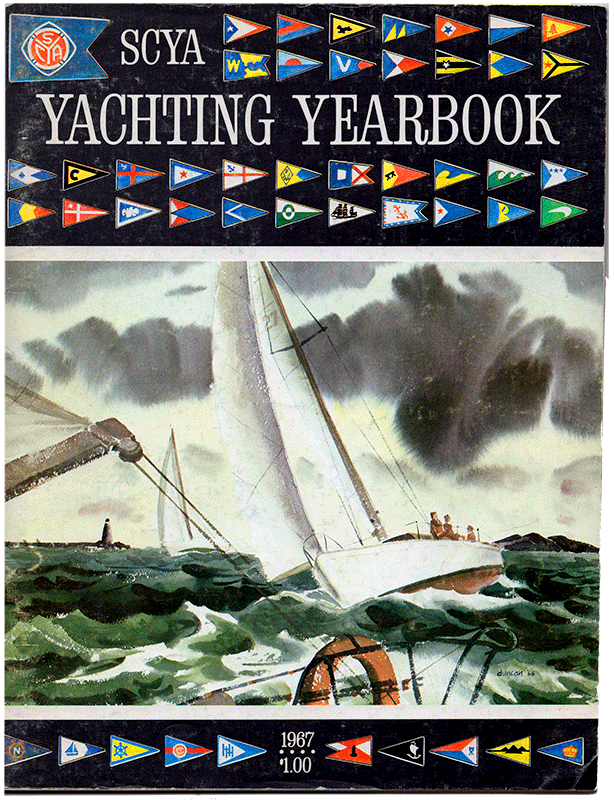 EVER SINCE 1921, forty-six years ago, yachtsmen of Southern California have been secure in the knowledge that through their yacht clubs, they have the opportunity to appoint delegates and alternates to the Southern California Yachting Association to work for a common good.

Every month during these forty-six years, with only a very few wartime exceptions, these delegates have met to consider the problems of the great sport of yachting here. A conservative estimate would be that over five hundred meetings of delegates have been held during that period. Considering the early years, when attendance was smaller, and the recent years, when attendance has been as much as a hundred people, perhaps it would be reasonable to strike an average of fifty delegates or alternates at each meeting for the life of SCYA. Assuming three hours per meeting, an average, we could estimate over eighty thousand hours have been devoted by delegates and alternates to aid our sport.

If we assume further, that SCYA committees will spend at least a like number of hours on work for SCYA, the total would be over one hundred and sixty thousand hours of direct time. Now, let’s just guess that the workload, resulting from the delegate-alternate function in SCYA, was as little as ten hours a year per person, on the low side, or one hundred hours a year per person, on the high side; thus we can begin to see the dimensions of the job. There could have been between one and one-half million hours to over sixteen and one-half million hours of service devoted to the great sport of sailing through the unselfish devotion of the yachtsmen of Southern California, serving directly and indirectly on projects of importance to all, through participation in SCYA.

Such statistics are impossible of verification, of course, and may be way under, or way over, the reality. But, irrespective of the actual count, which doesn’t really matter, there remains a gigantic contribution of one group of yachtsmen in devotion to the welfare of another group of yachtsmen. This is what has made our sport great. This is what has made our sport a happy one. Money could not have hired this participation. Reward could not have been in materialistic terms. This, then, is a gift of the heart… a gift for others… a gift of true dedication.

Now, what of the “givers”? What of the hundreds, perhaps thousands of yachtsmen who have unswervingly given their time, their money and their wisdom for the joint benefit of all SCYA clubs, in order to make yachting a better sport, competition a more rewarding event, participation a more fulfilling human experience. The “givers” have seen SCYA grow to become the greatest association of yacht clubs in the West; one of the greatest in the country, perhaps in the world. They have seen a fine and noble sport grow and prosper and grow again in this part of the globe, giving to young men and women much inspiration and great fun as well as many opportunities for meaningful social relationships. They have seen SCYA champions, in spirit as well as at the helm, grow up, marry, raise children, who in turn become champions in truth or in spirit, all in a few decades. And the “givers” have known, all along, the lasting rewards of real accomplishment. They have known the sport will always be better because of their efforts.

And the individual, what of him? Those who have given, who have worked so hard that others might enjoy yachting more, have thus made their own enjoyment greater. They have, themselves, been happier. They have made warm, deep and satisfying friendships which will belong to them as long as they live. And all because they, when it was their turn, gave of themselves. This, then, is SCYA… the durable foundation on which many yacht clubs have grown to maturity; the strong base on which a great sport has grown and prospered; the abiding expression of many *men and women whose dedication to others has never faltered.