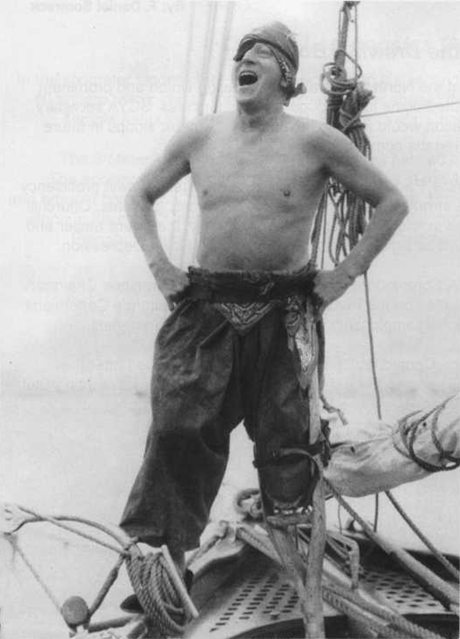 Admiral Albert Soiland M.D. – The first Commodore of SCYA stands as Dick Deadeye in the 1936 opening of Newport Harbor

When Admiral Albert Soiland, M.D., Dean of the West Coast Corinthians, formed the Southern California Yachting Association in 1921 he wanted to bring together California yachtsmen for friendly competitions and provide a framework of standards by which these contests could be followed.

More importantly, Dr. Soiland wanted to establish Southern California as the world’s yachting center. He invited yachting club members from Santa Barbara San Diego, together with sailors from Newport and Los Angeles to join the SCYA for the purpose of correlating their work and interests.

As the first Commodore of SCYA, Admiral Soiland had the foresight to prepare west coast sailors for the opportunity of hosting the 1932 Olympic Summer Games by placing SCYA in a dominant position to control the event. Additionally, the formation of the SCYA greatly increased America’s chances of Olympic success should Los Angeles win the bid to host.

Although yachting had been an Olympic sport since the first Olympiad at Athens, Greece in 1896, the U.S.A. had yet to medal in the event. France, Italy, Norway and Sweden dominated yachting competitions around the world. The formation of the SCYA evened the playing field.

BIRTH OF THE SNOWBIRD 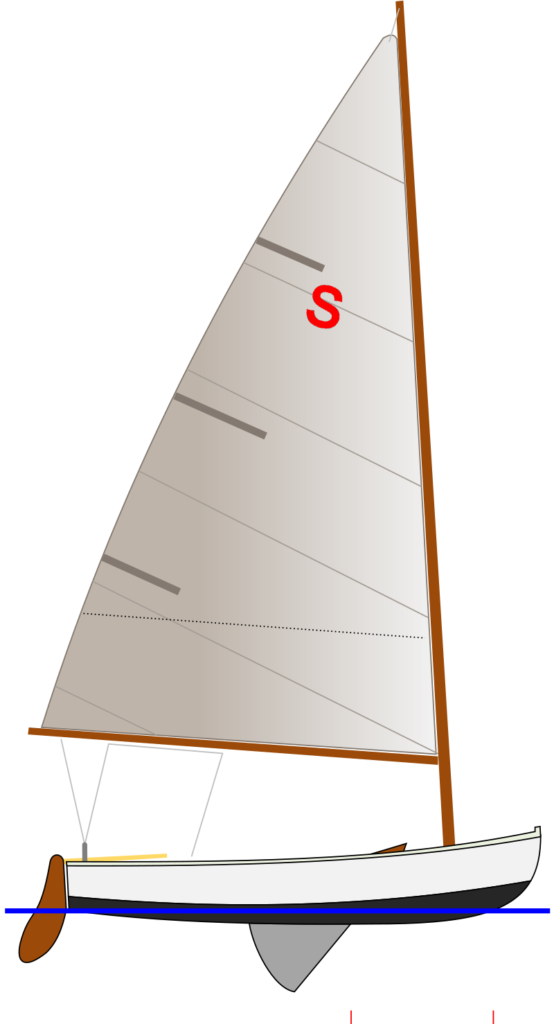 After sailing abroad for a year, SCYA’s Vice-Commodore and 1928 Olympic competitor Owen P. Churchill returned cautioned, “All of Europe is eyeing up the Southern California yachting situation at the present time. Especially on the monotype, there was all kinds of competition in that division in the last Olympics.” IT was time for action, and Churchill looked to the North American Yacht Racing Union for help.

Once the NAYRU gave its consent, the Olympic committee selected the monotype. As a dinghy relatively unknown in U.S. waters, the “Snowbird” was agreed upon and an entire fleet of Snowbirds was built by the U.S for the ‘32 Games.

The snowbird replaced the Twelve-Voetsol monotype as a single-handed dinghy. Churchill designed the re-rigged boat by lengthening the mast from fifteen feet to seventeen feet-six inches and shortening the boom to give the corresponding sail area of about ninety-five feet. A hollow mast was used which was lighter and much stronger. His efforts seemed fruitless when, in the Olympic trials (?), all three medals went  To the Europeans!

BACK to the DRAWING BOARD

In the late 1920s, C. D. Mallory, President of the North American Yacht Racing Union and prominent figure in international yachting circles, accepted plans to introduce a six-meter class. SCYA secretary Fred Bobsyshell confirmed that his association would work to include the six-meter sloops in future SCYA regatta competitions.

Once the six-meter boats were introduced on the Pacific Coast, California sailors gained swift proficiency in maneuvering them. Although the U.S. was strong in all four of the Olympic yachting events, Churchill believed America’s best hope for a medal was in this six-meter class. Additionally, they were easier and cheaper to build than the eight-meter boats, a significant concern during the Great Depression.

The first boat was prepared in Sweden by Donald W. Douglas, Jr. and was designed after the Swedish Gold Cup winner on the east coast. The second boat came from the Los Angeles Yachting Club boasting, “it’s the best boat money can buy.” The third was financed by the Long Beach Yacht Club.

A STAR IS BORN 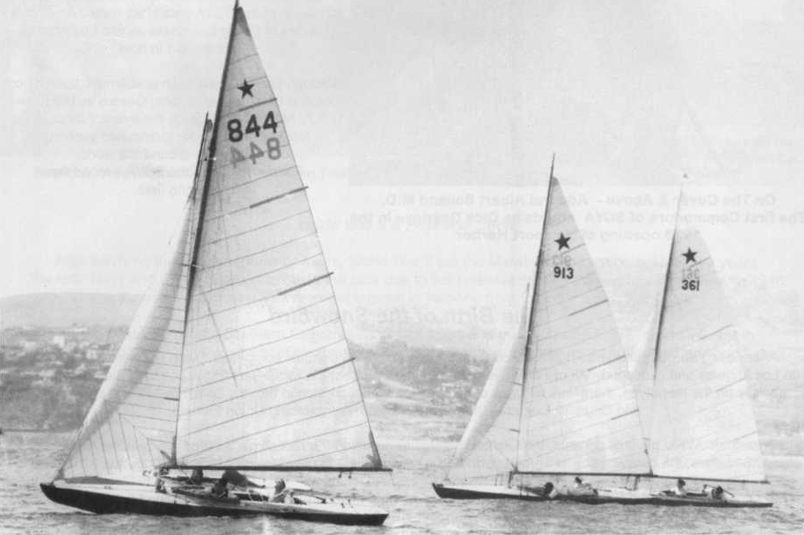 The Star class, originally slated for exhibition only, made its debut at the Los Angeles Games. Southern Skipper, Gilbert T. Gray and crew member Albert Libano sailed their two-person keelboat, Juniper to five first-place finishes to defeat Great Britain for the Gold Medal. The star division continued as a longstanding Olympic discipline until 2012.

The 8-Meter event for the United States was helmed by Vice-Commodore Owen R Churchill. The accomplished skipper represented America at the 1928 Holland Games on the Zuyder Zee, and brought his international experience to Los Angeles. His custom built Angelita, proved to be the fastest sloop in his class. Churchill along with John Biby, Alphonse Burnard, Kenneth Carey, William Cooper,
Piermont Davis, Carl Dorsey and John Huettner swept the Canadians for the Gold Medal.

EN ROUTE TO THE OLYMPIC GAMES 1936 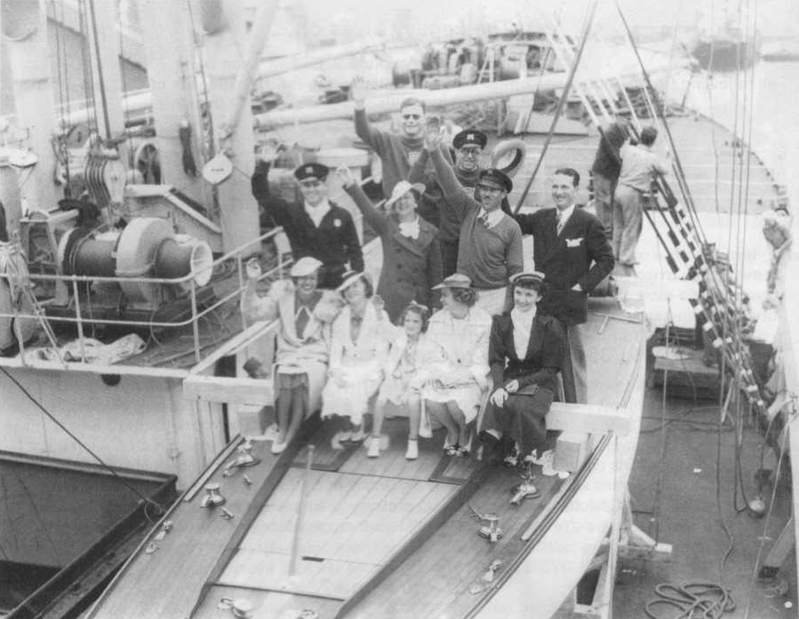 Owen P. Chrchill of Los Angeles winner of the 8 Meter championship in the 1932 Games loads his Sloop Angelita aboard the Danish East Asiatic Liner Canada and sails to represent America in the 1936 Olympic Sailing Races at Keel Germany. Photo shows Owen Churchill and Olympic games party on the deck of the Angelita, aboard the Liner Canada , as she sails from Los Angeles.

THE LEGACY LIVES ON

SCYA Bankrolls ’32 Olympic U.S. Sailing Team. The following Commodores and officers acted as guarantors for the expenses of Olympic racers. Where would U.S. Olympic sailing be today without them?

Over the week long competition, 57 athletes from 11 countries competed in four classes, Snowbird, Star, Six-Meters and Eight-Meters, The United States was joined by Austria, Canada, Spain, France, Germany, Great Britain, Italy, Netherlands, South Africa and Sweden. Boats in all classes were provided by SCYA for those nations unable to transport their yachts.

After his captainship of the ’36 team, Owen Churchill became the first American to compete in three Olympic regattas, and went to Tahiti for two years to invent his now-famous swim fins.

Donald W. Douglas, Jr. also a competitor in the 1928 Olympics, would later compete in the Transpacific Yacht Race from Los Angeles to Honolulu. Part of the 1953 winning crew on the 161-foot schooner, “Goodwill,” Douglas would win the Transpac again in ‘59 as the Sailing Master. His father, industrialist Donald W. Douglas, Sr. (of Douglas Aircraft fame), was Vice- Commodore of SCYA in ‘34 and Commodore in ’35 and‘36.

Credits for this part of History:
F. Daniel Somrack “SCYA Yearbook. ”SCYA and the 1932 Los Angeles Olympic Games, 2016, pp. (no page numbers in this edition) 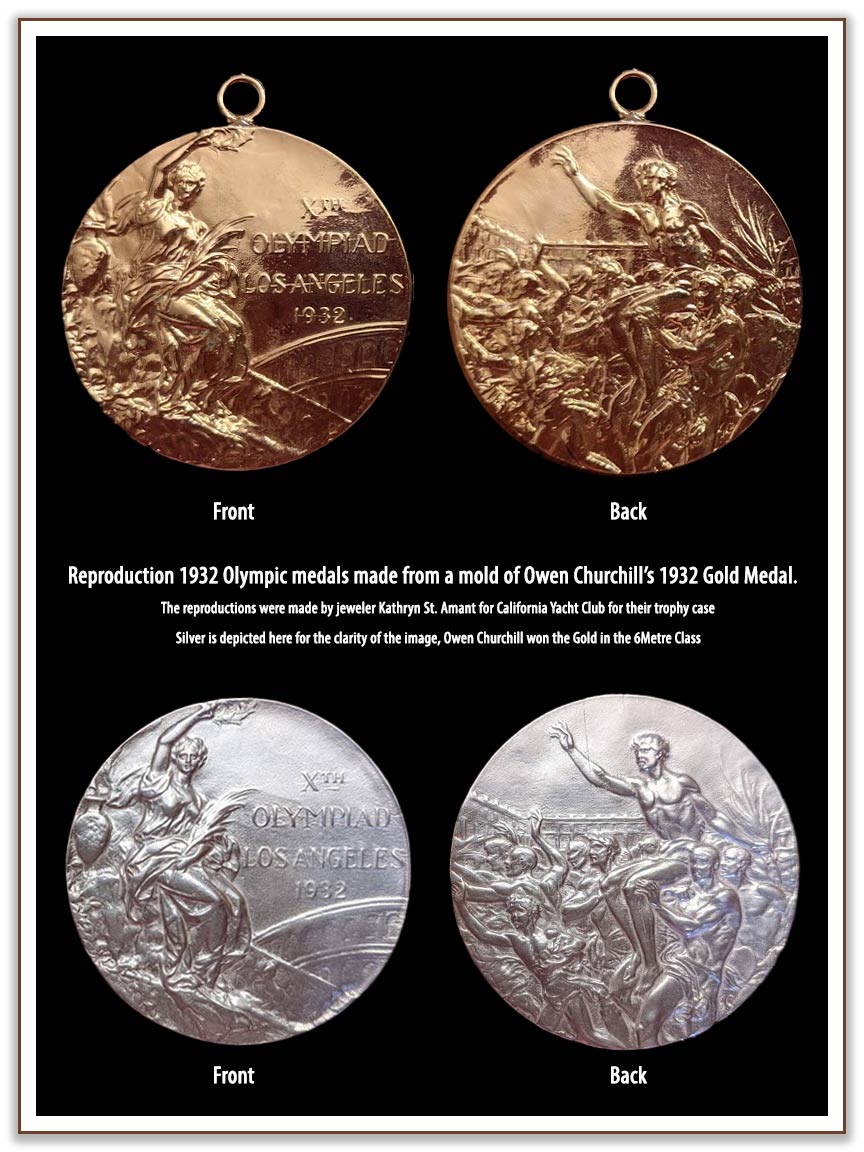