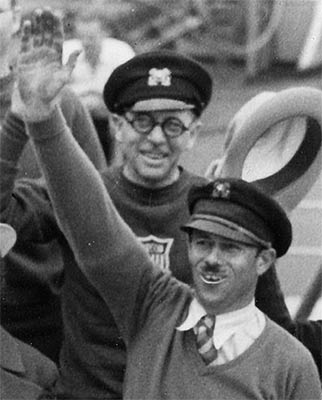 Owen P. Churchill, Carl Dorsey behind him, joking around about going to Nazi Germany for the Olympics in 1932. SCYA Photo Olympics-004

A man who perhaps was the greatest sailor of his time, Olympic gold medalist, an inventor who helped the success of the OSS (early Navy SEAL Teams) during WWII and in all likelihood, the Olympian who gestured to Adolph Hitler with his middle finger “The Bird” during the opening ceremonies of the 1936 Olympiad in Nazi Germany…

In 1984, during the Olympic Games in Los Angeles, the chairman of the Los Angeles Olympic Committee, Peter Ueberroth, gave special recognition to a man whose life story is only known to some but had a huge impact on sailing and even the world.

Owen Porter Churchill was born in 1896 and was the son of a well-known banker who founded the Farmers and Merchants Bank in Los Angeles.  As a young man, Owen took to the sport of sailing and quickly became a first-class yachtsmen, winning many races.  In 1925 Owen Churchill won 5 first place awards in his boat “Galliano”.  Owen was recognized in Southern California as one of the greatest sailors of the day and quickly became a hot commodity.  This boosted him in 1926 to the position of Vice Commodore of Southern California Yachting Association and Commodore of Catalina Island Yacht Club.

Owen Churchill was instrumental in attracting big name racers from around the Country to Southern California to challenge him, which helped promote the start-up of the now nationally recognized SCYA Midwinter Regatta.  It was realized early on that for Southern California to have a chance at medaling in Olympic competition (proving to the world that we have the highest caliber yachtsmen in the world), Churchill would be the best bet to accomplish this goal and he was!!!  He was a member of four U.S. Olympic teams; 1928, 1932, 1936 and 1952 holding the title of team captain for three of those yachting teams and winning Olympic gold in the 1932 Los Angeles Olympics on his Sloop, 8 Meter yacht, “Angelita”.

Based on trailblazing research by Southern California military historians Erick Simmel and Phil Garn, Owen Churchill would also change the way people recreate and fight in and under the sea around the world…  People around the planet recognize the name “Owen Churchill” for his pioneering Churchill swim fins, still manufactured and used to this day while very few are even remotely aware of his renowned sailing accomplishments.

In the 1930’s, Churchill took his family to the South Seas, where he observed Pacific Islanders using woven leaves attached to their feet to propel themselves.  He also acquired a pair of “metal framed” crepe rubber swimming aids, called propulseurs, now known as swimming fins/swim fins or flippers.  These natural rubber propulseurs with metal frames were invented over a period of time from 1914 to the 1920’s by French Naval Officer Louis de Corlieu who produced them in his Paris apartment (much in the same fashion as Bill Bowerman made running shoes in his garage on a waffle iron for University of Oregon athletes well before introduction of “Nike Shoes.”)  de Corlieu patented these propulseurs in the early 1930’s and tried to interest the French Navy in the lifesaving potential of these new devices without success.

Upon his return to Los Angeles, Churchill wanted to commercially produce devices like these for the growing skin diving and lifeguard communities in Southern California during the decade of Dustbowl migration and aviation industry bloom in Southern California.  Churchill with vulcanizing experts from the burgeoning local aviation industry quickly developed a vastly superior all rubber design made from vulcanized rubber (this vulcanizing process significantly increased elasticity and strength of rubber) with no metal framing.  Former Santa Monica Bay Los Angeles County Lifeguard (and Office of Strategic Service [OSS] swimmer operative) James “Jim” Eubank recalled testing prototypes for Mr. Churchill in late 1937, and Churchill’s commercial manufacturing began in 1938. 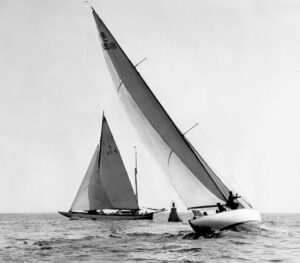 Eastern yachtsmen will have the Pacific Coast’s fastest 8-metre racing sloop to contend with during the summer racing season on the Atlantic. She is the “Angelita” owned by Owen Churchill, famous Los Angeles yachtsmen. Here is the “Angelita“, skippered by Churchill, sweeping around a buoy on the Los Angeles regatta course.
Photo: SCYA Olympics-003

Churchill conducted a patent search, learned of de Corlieu’s patent then obtained the worldwide rights from de Corlieu who was then living in Algeria to manufacture the propulseurs in 1940 at the insistence of a certain William J. Donovan.  Owen Churchill called his manufactured product “swim fins,” the standardized term used to this day to describe these devices.  Though Churchill obtained the rights, and first mass produced his swim fins in the late 1930’s, the new patent, submitted 1940, was not issued until 1943.  Churchill engaged fellow Los Angeles Athletic Club Member and gold medalist Olympian and Hollywood Tarzan Johnny Weissmuller, a member of Churchills yacht club as well as Olympic gold medalist and surfing legend Duke Kahanamoku, to promote his fins.  Legendary Los Angeles Lifeguard Cal Porter recalled a 1940 demonstration at the Los Angeles Olympic Stadium where slightly more ordinary swimmers wearing Churchill swim-fins easily shattered the world records for the 50-meter and 100-meter freestyle events.  Local watermen would also use the swim-fins for lifesaving, body surfing as well as spearfishing and shellfish diving.  Cal Porter would pioneer the technique cutting across waves in 1940 as opposed to riding waves straight into shore for body surfing.

In the 1930’s, that certain Willian “Wild Bill” Donovan was working “unofficially” as a spymaster for President Franklin Delano Roosevelt using Donovan’s international law firm as cover.  Donovan’s secret work would ensure Churchill’s invention would have a worldwide impact.  During this pre-war period, Donovan’s daughter, Patricia, wanted to be in the movies, but would need some dental work, so he asked his friends and clients, William Randolph Hearst and Marion Davies if they knew of a suitable dentist in the late 1930’s.  They did not, but their friend, Academy Award winning director John Ford did and introduced Donovan to his fellow yachtsman, Naval Reserve officer and adventurer, Jack H. Taylor, USC trained orthodontist to the stars.  After a number of conversations, Taylor arranged a demonstration of Churchill’s swim fins, locally produced Sea-Net dive masks (another Los Angeles area development) and paddle boards conducted by Santa Monica Bay lifeguards, skindivers and watermen in 1939. The astounded Donovan thought that there very well might be a use for these new devices and the men’s ocean skills in the coming war.  Ford and Taylor also introduced Donovan to their British screenwriting friend, Herbert G. A. Wooley, a decorated First World War sailor with a background in amphibious operations and naval raids, Gallipoli, Turkey; Zeebrugge and Ostend in Belgium.  Donovan also learned of genius boy wonder-medical student, Christian Lambertsen, on the East Coast who was developing what became the best underwater breathing apparatus in the world.

Woolley, Taylor and Lambertsen would be sequestered by Donovan into pre-war US spy agency, Coordinator of Information establishing the Maritime section that would soon become the much larger Maritime Unit of Donovan’s wartime OSS.  They would bring in many prewar California watermen and lifeguards to form the Special Maritime Group of combat swimmers who would train at Camp Pendleton and Catalina Island incorporating Marine Raider training along with swimming and scuba diving before going overseas to fight.  OSS Maritime Unit men would be the first to coin the terms- “frogman”, “swim buddy/swim pair” and Self-contained underwater breathing apparatus (scuba).  The OSS orders would be the first lucrative government contracts for what had been a very localized novelty.  After the heavy casualties suffered by the Marines at Tarawa and demolition men during the Normandie landings, a section of Special Maritime Group swimmers was sent to Hawaii where they served first as swim instructors introducing their superior swimming and reconnaissance skills along with Churchill swim fins and Sea Net dive masks to a thousand men before developing themselves as part of Underwater Demolition Team 10 and Special Reconnaissance Duty on the submarine USS Burrfish (UDT-10 was entirely equipped and paid for by the OSS, not the Navy) in the Pacific Campaign. The Special Maritime Group men essentially put the “Frog” in frogmen turning these amphibious combat demolition men operating in three feet of water or less into true Underwater Demolition Teams. The US Navy’s adoption of Churchill’s fins would result in contracts for thousands of pairs of swim fins.  Other Special Maritime Group operative swimmers as the frogmen were designated would be sent to the China Burma India Theater where they would operate from the crocodile infested Chaungs of the Arkan Coast to the jungles of Sumatra on sea, land and air conducting hydrographic reconnaissance, prisoner snatches, spy missions, raids and the first American limpet mine attacks with Churchill fins and scuba as well as miniature submarines, called “sleeping beauties.”  The UDT’s, Dr. Lambertsen and Captain Phil Bucklew (America’s premier sea commando) would bring these unique capabilities forward into today’s SEAL Teams.  In a strange twist of fate, some of the same Los Angeles watermen would unwittingly introduce Axis agents to the Churchill swim fins and Sea Net masks in 1940.  Then in an even more unbelievable turn of events, OSS men would be fighting alongside their former Italian foes with both sides using Churchill fins and Sea-Net Masks. After the war, more people were introduced to swimming and diving by these veterans and thousands of people have been saved by lifeguards wearing “Churchills”.  Churchill would literally create an empire, later selling the license to Voight, Swim Master then Morrey now owned by Wham-O, which produces Churchill swim fins very similar to the pre-war design, to this day…

It was known that Owen Churchill had a vast contempt for Adolf Hitler and would make fun of him when given the chance.  As the captain of the United States sailing team in 1936, Churchill along with 358 other fellow American athletes, marched into Reichssportfeld which was the Olympic stadium built for the 11th Olympiad in Nazi Germany.  The United States athletes were under strict orders not to salute or wave to Adolf Hitler during the opening ceremonies.  As legend has it, Owen Churchill raised his middle finger and flipped off Adolph Hitler who was in the reviewing stands with 110,000 screaming fans in attendance, of which most were fanatic Nazis.

As mentioned above, Owen Churchill at age 88, was honored during the 1984 Los Angeles Olympics for his Olympic service by Peter Ueberroth for his lifelong efforts to promote yachting.  Churchill’s 8 meter Yacht, Angelita, was fully restored for the occasion and re-christened at the time in Los Angeles harbor.  Owen Churchill would pass away one year later. 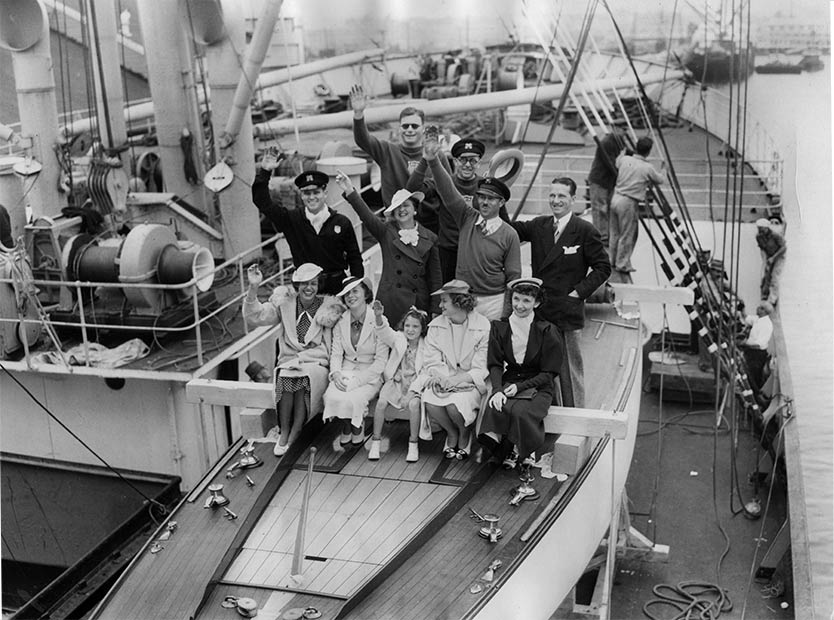 (From the back of the photo)

By Shawn Milligan
It was known that Owen Churchill had a vast contempt for Adolf Hitler and would make fun of him when given the chance. Here is one such example, where Owen along with friends, fellow Olympic team members and family, enjoy a moment to “take a jab” at Adolf Hitler for the national newspapers.

*Photo at the beginning of this article is a blow up of Churchill from this image.

Credits for the photos on this page come from the back of the original photos:

Photo Olympics-002 and 004: Reference Department 5-8-1936 N.E.A. Credit ACME
LA346182
EN ROUTE TO THE OLYMPIC GAMES
Owen P. Churchill of Los Angeles Winner of the 8-Metre Championship in the 1932 Games, loads his sloop Angelita aboard the Danish East Atlantic Liner Canada, and sails to represent American in the 1936 Olumpic sailing races at Keel, Germany. Photo shows Owen P. Chruchill and Olympic Games party on the deck of the Angelita, aboard the liner Canada, as she sails for Los Angeles. 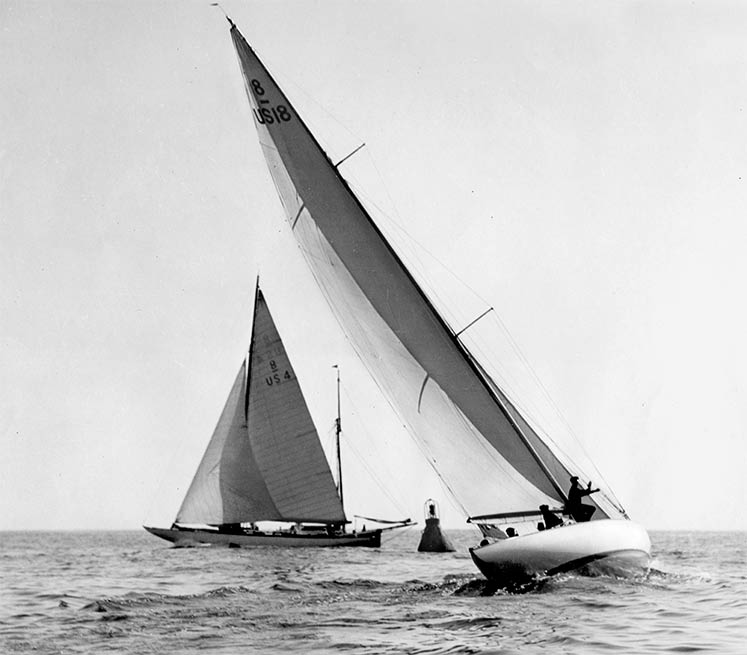