The Ventura Cup Regatta has been one of the premiere and longest running yachting events in the Santa Barbara Channel area. It brings into competition the best yacht racing sailors in the Ventura, Channel Islands and Santa Barbara Harbors.

How the challenge series began
In 1968, Channel Islands Yacht Club challenged Ventura Yacht Club to a team race around Santa Barbara Island. Ventura YC accepted the challenge, but preferred to sail a triangular course. So a 25-mile triangular course was set up and three boats were to represent each club. The victory would go to the club team with the lowest total corrected time. Ventura was represented by a 48-foot cutter Freedom, the 50-square meter Siboney, and the Cal 25 Scorpian. CIYC was represented by Adios a Cal 36, Dilemma, a Bounty 2, and Christy Lee, a Spencer 35.

The yachts raced for the 25 miles, with Freedom first to finish, followed by Adios, Dilemma, Siboney, Scorpian, and Christy Lee. The teams were so closely matched that Ventura won the event by less than two minutes on total corrected time in a race sailed under the PHRF handicap system.

The following year 1969, Ventura accepted challenges from both CIYC an Anacapa Yacht Club. This time it was decided that each club would be represented by only one boat, a class boat, so Cal 34’s were selected. Ventura was aboard Yankee Doddle, Anacapa was aboard Andorra, and CIYC was aboard Shrew. All three boats were maneuvering prior to the start in a howling east wind when Andorra’s main ripped in the heavy winds and Anacapa had to power into the harbor. Hastily it was decided that Yankee Doddle would race against Shrew in match races with the three clubs rotating crews. Ventura won that series. The match racing format, similar to the America’s Cup series, continued through the 1978 challenge regatta. Cal 34’s were used 1969-72. Of the ten annual match race series Ventura won three while Anacapa won seven.

The Cup
The Ventura Cup, the official perpetual trophy, is a large silver cup or bowl on a rich walnut base and was donated by Fred Moldenhauer then president of AVCO Savings, a member of VYC and winning skipper of the 1969 challenge race.

Changes in Race Format
In 1979 the Ventura Cup Regatta changed again back to the team racing format, with five boats from five area yacht clubs. The change was made to generate more interest. Additional interest did occur as evidenced by six club participation in 1980, seven clubs 1981-85 and then eight clubs 1986 and beyond. Santa Barbara Yacht Club dominated the series every year from 1979-92 except for Anacapa’s wins in 1984, 1985 and 1989.

The 1995-98 regattas were run under a somewhat modified scoring system. Five boat teams were continued, but only the top three boats from each team were counted for scoring purposes. There were four different handicap bands and clubs were required to have one boat in each of the bands, with a fifth “wild card” being allowed in any one of the bands. Under this format Ventura Sailing Club and SBYC each captured the Cup one time and VYC captured the Cup twice.

The 1999 and 2000 competitions were run under still further modified format. There were regatta races in three classes and at a separate venue there were “random leg” races, with boats sailing longer courses which involved sailing on all points of the wind. For team title, each club’s top boat in the random leg was scored in each race, and the two top boats in any two of the three regatta classes. Ventura took the Cup in each of these two years.

In 2001 racers could enter the competition individually and did not have to be part of a yacht club team. For the team trophy, yacht clubs could enter as many four-boat teams as they wished. There were four regatta classes and a single random leg class. The format required each yacht club four- boat team to be in at least three classes. The winner in 2001 was CIYC.

The 2002-04 formats were similar to the prior year except that the random leg now included two classes. For the first time clubs entered multiple teams. The first two of this series was won by SBYC but in 2004 the Cup returned to Ventura.

In 2005 the format was again similar to the prior year except that the random leg now had six classes and Ventura captured the Cup for a second straight year.

The most significant changes in 2006 included two separate regattas; a team racing regatta for the Ventura Cup and individual competition regatta in the newly named Santa Barbara Channel Challenge, each with a separate scoring system. The Ventura Cup regatta included four clubs with four-boat teams. SBYC emerged the winner after five races. The Santa Barbara Channel Challenge had four fleets in three races with a total of 23 competitors representing nine clubs. VYC’s first place winners were Wind Dancer in Spinnaker A Fleet and Uhambo in Non-spinnaker Fleet.

In 2007 competition for the Ventura Cup was sailed with four boat teams. VYC won back the Cup; additional places were 2nd to SBYC, 3rd to a combo of AYC-CIYC-PBYC, and 4th to SBSC. Winners in the Santa Barbara Channel Challenge were in Class A Deception, Class B Tortoise, and Class C Scooter. A total of 26 boats were entered. 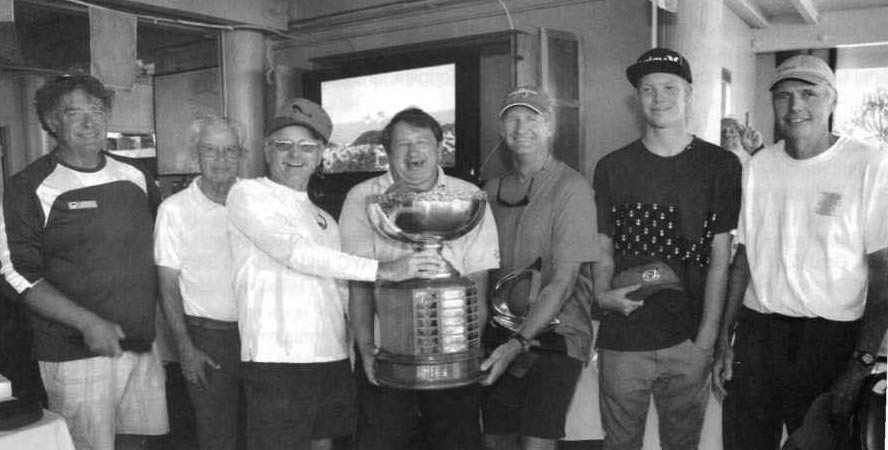 The information below is from the Ventura Yacht Club website

Ventura Keys, Ventura Harbor entrance and the mouth of the Santa Clara River

The Ventura Yacht Club, originally known as the Ventura County Boat Club, was organized in 1938. In 2013 we celebrated our 75th anniversary.

Ventura Yacht Club is one of the few clubs on the coast which owns its own clubhouse and slips. The club has a proud history of having started as a do-it-yourself type organization. The club’s official newsletter is the Forecast, which has been published monthly since 1940, one of the oldest continuous publications in yachting.

Ventura Yacht Club prides itself in accomplishments which range from an active racing and cruising program, to being one of the prime moving forces in having the Ventura Harbor constructed. The club has long been supportive of the Ventura Port District and Ventura Harbor in matters ranging from lobbying efforts to get the harbor constructed –and reconstructed following devastating 1969 floods– and the breakwater built, to playing key roles in such activities as the annual Christmas Parade of Lights and other functions which help put the harbor’s best foot forward.

Many yacht club members have served on the Port District’s Board of Commissioners over the years and, in fact, the club was somewhat instrumental in the Port District having been formed in the first place. It can reasonably be said that the club has been a moving force in the development and growth of Ventura Harbor.

The club has nurtured many youth sailing programs and has supported youths in regional and national sailing championships. 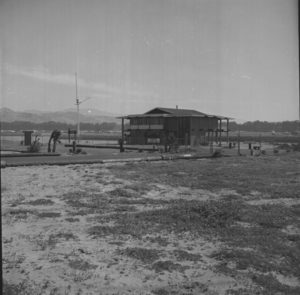 The club was incorporated in 1940 as a non-profit organization, with an original membership of 60.

From the beginning, one of the more serious aims of the members has been to work for better boating facilities in Ventura County. Among the early activities of the club was the construction of launching and mooring facilities at Hueneme Harbor in 1939. World War II halted this project, and efforts were then centered on clearing the snags from the coastal slough known as McGrath Lake in order to hold regattas for outboards and small sailboats and create an interest in boats and boating.

After the war, efforts were resumed to secure harbor facilities in Ventura County with particular emphasis on the Pierpont Bay area. During the campaign to secure a harbor, one of the highlights was the construction of a model of the proposed harbor, which was used extensively for publicity purposes. These efforts, combined with others, resulted in the formation of the Ventura Port District, which eventually built the Ventura Marina.

A year or so after World War II ended, the City of Ventura allowed the club to use a city-owned building on the Ventura Pier where regular meetings were held. When freeway construction caused demolition of the building, the meeting place was moved to the Ventura Recreation Center on Main Street.

The name of the club was changed from the Ventura County Boat Club to Ventura Yacht Club in November 1960.

The club secured a building site lease from the Ventura Port District in February 1965, and launched plans for construction of the existing clubhouse. 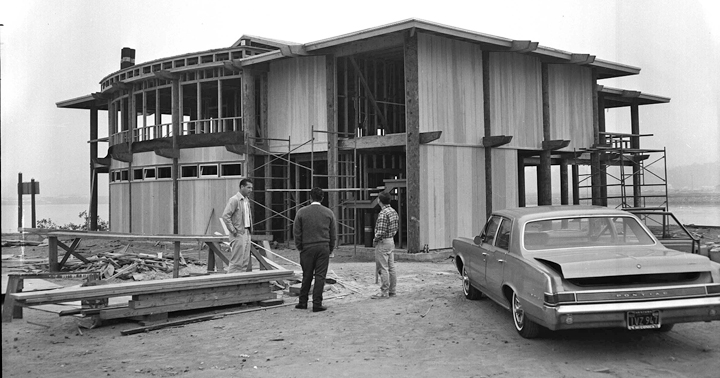 October 29, 1966 – Ventura Yacht Club under construction. The dark vertical lines are the poles. The curved west side of the building, lined by windows, was designed by the architect Kenneth Hess to suggest the bridge of a large ship. Discussing the construction on the left is Don Mills, the other two individuals have not been identified. The Pontiac belonged to photographer Flash Wheeler. (Photo: Flash Wheeler) 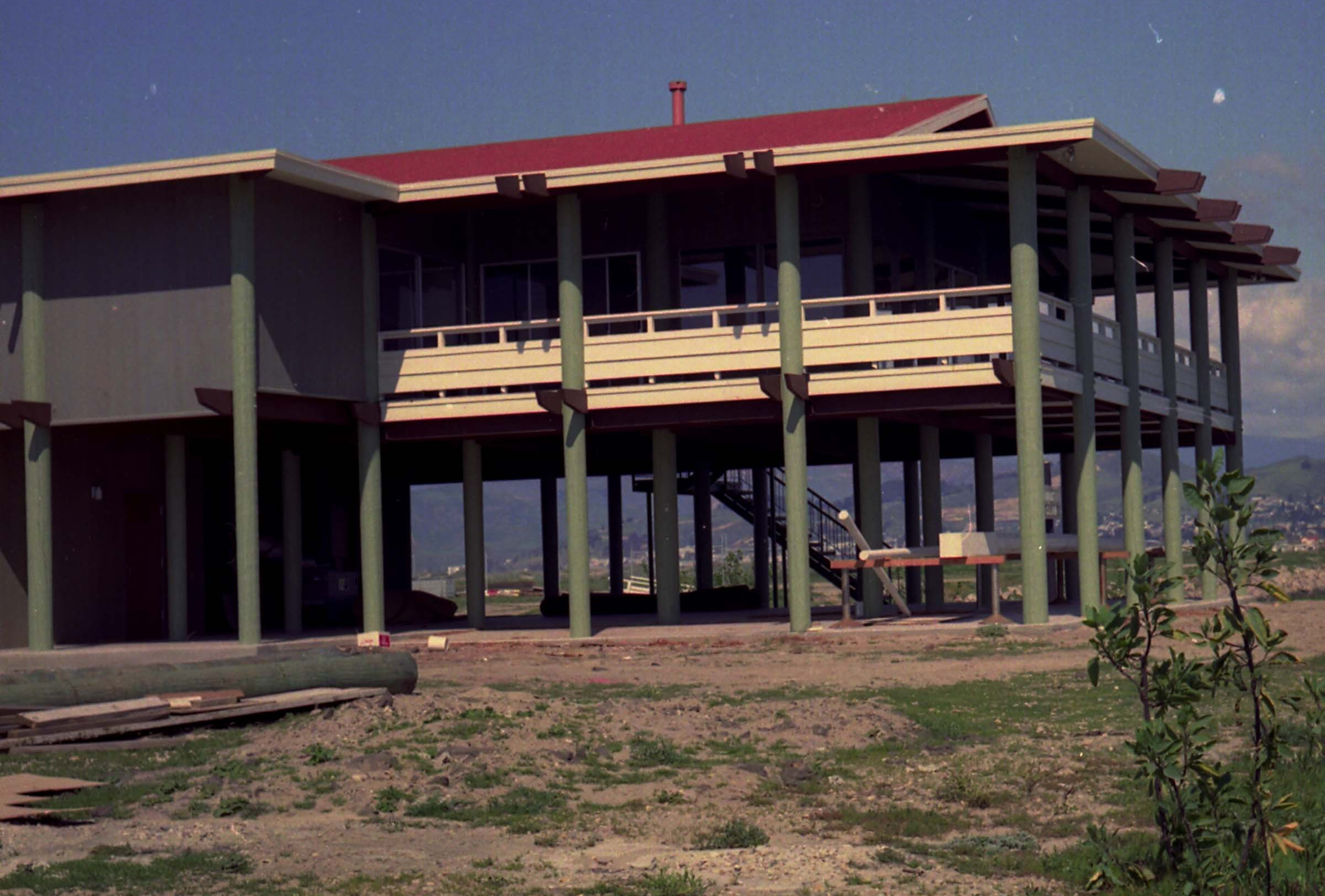 Ventura Yacht Club in early 1967 after painting and the prominence of the second story over the open ground floor area. Note in the right hand bay of the first story; components of the flag mast can be seen on saw horses before being raised into place in April of 1967. (Photo: Flash Wheeler)

Membership meetings are now held in the clubhouse which was completed in 1967 and is located on the peninsula at Ventura Harbor.  Here, a well rounded program of boating and social events fills the club’s yearly calendar.

In 1969, floods devastated the harbor in January and February, and for months the clubhouse was not accessible by land. Members used dinghies or other vessels to make their way to the clubhouse which was on what amounted to a storm-wracked island.

In June 1972, the lease was amended to include the water area. The addition of a small-boat hoist was completed in 1972, and in 1973 the club’s own docks were installed in front of the clubhouse. From the Ventura Port District, the club acquired docks, which had been salvaged from the 1969 floods.

The club annually conducts the Ventura Cup Regatta, which is the most prestigious yacht racing event in Ventura and Santa Barbara counties and annually attracts the fastest boats and crews that area yacht clubs can muster. Every-other year the club hosts the Ventura County to Newport Race. An active racing, cruising and social program offers something for yachting oriented people of all ages.

A twelve member Board of Directors oversees the affairs of the Ventura Yacht Club Corporation. Directors are elected by the membership to serve three-year terms.   Officers are elected annually.

Looming proudly over the grounds is a flagpole, which seems to be an appropriate reflection of Ventura Yacht Club. The flagpole is old and proud (the 55 foot mast stood at the old Oxnard High School site on C Street from the early l900’s)  strong and distinctive. It has been maintained and tended to by a caring yacht club, whose burgee it proudly flies.

Information from https://venturayachtclub.org/history/
accessed on Feb 1, 2021