N0 other group has done more to promote the development of boating in Southern California than the boat builders themselves. These men, most of them schooled in other areas, were quick to see the possibili­ties offered by the waters and the climate of Southern California and adapted their talents to designing and building boats best suited to local requirements. This idea was accepted with enthusiasm by the sea-loving people of Southern California, so that soon individual boat builders joined forces and established the firms which today are known the country over.

It is only fitting, then, that the oldest of these firms, Fellows & Stewart of Terminal Island, should today hold its place as one of the leaders in the pleasure boat industry. In 1896 the late Joe Fellows established the Joe Fellows Yacht & Launch Co., where he was soon joined by Victor B. Stewart. They were an excellent team, for Joe was a builder par excellence, while Vic was a business man. So the combination prospered and soon became Fellows & Stewart.

When Los Angeles Harbor was little more than a bend in the coastline, Joe Fellows built his little shop on Terminal Island and began turning out boats that were designed to beat those that had come from the boards of eastern naval architects-and beat them they did. In fact, it was the craft that slid down the ways at Fellows & Stewart’s that set the stage for the modern era of the boating industry on the Southern California coast. 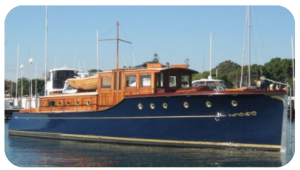 Most of the innovations introduced by Joe Fellows have become permanent fixtures of the boating scene here. Contrary to the general practice in the early days, the firm built racing boats with cruising accom­modations that could take it in ocean racing. Fellows & Stewart built cruising boats that could get out and foot. The inherent quality of these early craft is at­tested to by the fact that many of them are still in commission(editor: as of 1960) -boats like the Minerva, Idler, Venus, Wasp and Mischief I.

The first stock cruiser in the West was produced by Fellows & Stewart, a factor which very likely created many new boat 0wners who might otherwise not have become boating fans. Everybody today recognizes “Fellowcraft,” which are to be found in anchorages all along the southern coastline.

After being one of the leading sailing skippers for years, Joe Fellows turned his designing talents to speedboats and won some of the West’s finest trophies in that sport.

The first five of the California 32’s were built by Fellows & Stewart in 1937, and this is still one of the leading classes in racing in Southern California. One of them, Walter Elliott’s Escapade, won the 1941 Honolulu Race and for years had almost a strangle­hold on the San Diego Lipton Trophy.

The California 32’s were succeeded by the Island Clippers. Fellows & Stewart built no less than eighteen of these 44ft. sloops.

At the present time Fellows & Stewart has two yards, both on Terminal Island. The older yard has been turned into a “Do-It-Yourself” yard, where people who want to build their own boats can rent the space and the tools for this purpose. They can also secure expert advice and, if they want it, can have as little or as much of the work done by the yard’s own men as they desire. This has proved a very successful move and is the brain child of the present head of the firm, Joe Fellows Jr.

The oilier and newer yard is about half a mile down channel. Here the new construction, repairs and maintenance are attended to. The second generation in Fellows & Stewart is carrying on in the traditions of the first. (Editor: It was sold to Harbor Boatbuilding in 1967). 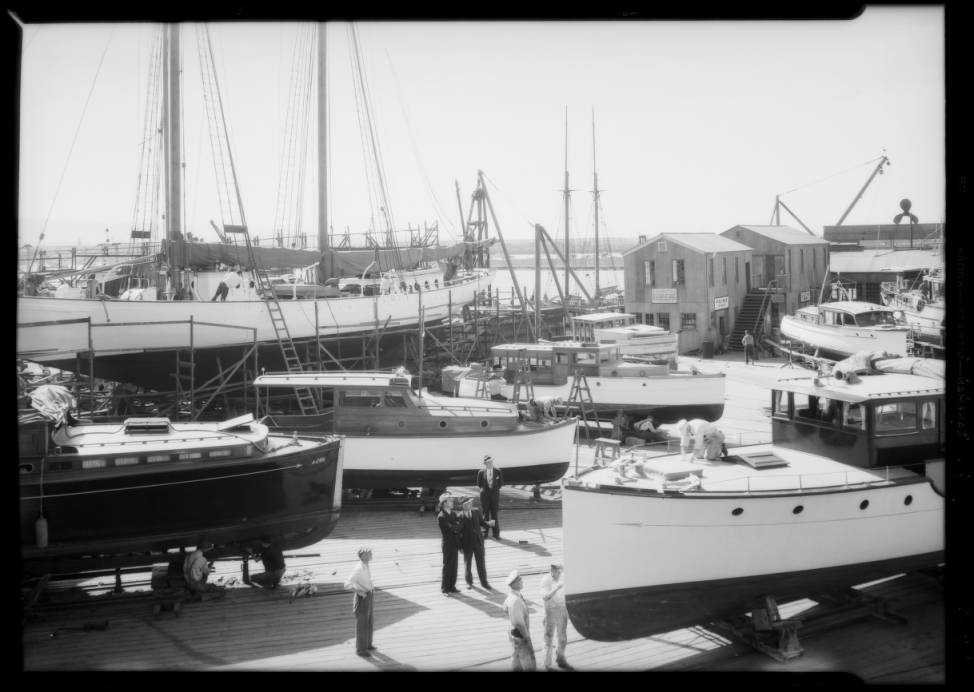 VESSELS from THE BOATYARD