The history of yachting in Southern California cannot be correctly chronicled without giving more than passing men­tion to the Catalina Island Yacht Club. Founded over three decades ago, the roots of this substantial organization go down so deep they touch the very bedrock of the sport’s foundation.

The Catalina Island Yacht Club was not the first such or­ganization to headquarter on Santa Catalina Island. Its predecessors were the Catalina Yacht Club, which came into being in 1892 and disbanded in 1914, and the Sophia Yacht Club, which had a thirteen-year span of life beginning in 1903 and ending in 1916.
It was in the early part of 1924 that a group of Corinthians drew up the plans for the Catalina Island Yacht Club. The history of the club proves that they were men endowed with vision, as well as stick-to-it-iveness, for they stood by from the time the keel was laid on August 23, 1924, until the club had safely as well as successfully sailed its first courses. 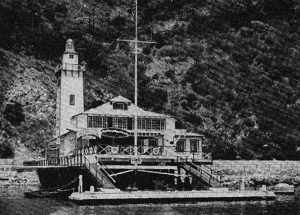 Unlike the majority of similar Southern California organi­zations, the Catalina Island Yacht Club is operated under what can be classed as dual or interlocking management, this consisting of a Board of Governors and a staff of flag officers. To G. Benton Wilson went the honor of being the club’s first President, with Charles R. Ramsey serving as !st Vice-Presi­dent, Howard C. Miller as 2nd Vice-President, and E. R. Abbott as Secretary-Treasurer. W. W. Wilson and James W. Jump constituted the club’s first directorate. There is hardly a chapter in the history of Southern-California yachting that docs not carry the names of these pioneers.

Unless he be a resident of Santa Catalina Island, or unless he hails from some point east of the Rockies, it is doubtful if the Catalina Island Yacht Club has a member who is not also a member of another yacht club. By far the greater portion of its extensive membership is made up of yachtsmen who are also members of one or more of Southern California’s other major yacht clubs. This unique situation grew out of the fact that these men, when cruising to Avalon, did not wish to use the club’s facilities gratuitously nor to accept its hospitality services, which these yachtsmen knew no club could extend to nonmembers and still continue to exist.

To Norman Pabst, who served the Catalina Island Yacht Club as Commodore in 1930, goes the distinction of being the Corinthian who thought up, planned and promoted the club’s outstanding and most unusual event, the annual Commodores’ Cruise. The basic idea of this event was for the commodore of each mainland yacht club to up anchor and, at the head of a fleet from his club, cruise to the island’s famous Isthmus Cove where, over the Labor Day holidays, the hundreds of yachtsmen with their families and friends were guests of the Catalina Island Yacht Club.

The first of these annual events was held in 1931 during the commodoreship of Douglas Radford, and proved to be such a success that the Commodores’ Cruise ranks in impor­tance with the annual Championship Regattas.

Few, if any, are the yachtsmen who have not seen and thrilled over the aerial view of 762 yachts jammed into every available inch of mooring space at the Isthmus and its nearby coves to participate in the combined Commodores’ Cruise and Pacific Coast Championship Regatta held there in September of 1937.

Since the end of World War II the position of the Catalina Island Yacht Club has been one of increasing importance. The number of both sail and power cruising yachts with Catalina Island as their nearest objective, particularly for weekend trips, is now so great that Avalon and the other coves on the island are filled to the guards from May to November. As the leading boating organization on the island, the Catalina Island Yacht Club has enjoyed a phenomenal growth, and continues as one of the leading clubs on the coast.