In 1922, when Newport Harbor was more shoals and sandbars than open water, the Southland Sailing Club (soon renamed the Balboa Yacht Club) was formed by a small group of sailors wanting an active organization with an emphasis on family sailing. From its beginnings in a small wooden structure on open, sandy Balboa Peninsula, BYC has evolved to become one of southern California’s most prestigious yachting organizations. In 1926, the Club moved to a new clubhouse on the southeast corner of Little Balboa Island, a stone’s throw from its present location on Bayside Drive. Over the fireplace hung a burnished wood plaque bearing the Club’s motto, “A pound of pluck is worth a ton of luck.” Originally donated by the first commodore, Isaac B. Potter, the plaque hangs today over the present Club’s Bayview Room fireplace.

The Newport Harbor of the past began to change as dredging began in 1935, and the following year, the harbor we know today was officially opened for navigation. Balboa Yacht Club, with its prime location near the harbor entrance, now had a convenient, protected anchorage for its growing fleet.

BYC signed a lease with the Catalina Island Company in 1957 giving us an out-station site at Whites Cove, west of Avalon. Thanks to members’ untold hours of hard work, from cement work to landscaping, plumbing and wiring, to carpentry and painting, this facility is now a treasured getaway site for members to enjoy. Whites Cove is truly a remarkable placeThe Clubhouse and facilities on Bayside Drive have evolved over their half-century of use to meet the changing yachting needs of the membership, and to provide a comfortable environment for a wide variety of social activities. A detailed history of Balboa Yacht Club includes a litany of its members successes in some of yachting’s most highly acclaimed competitions. Its cruisers have ranged worldwide in their boats. In fact, Baja California and the coast of mainland Mexico are as familiar to many of the members as the coves of Catalina Island

Today, Balboa Yacht Club is still among the leaders in yachting and is still true to its tradition of family involvement. 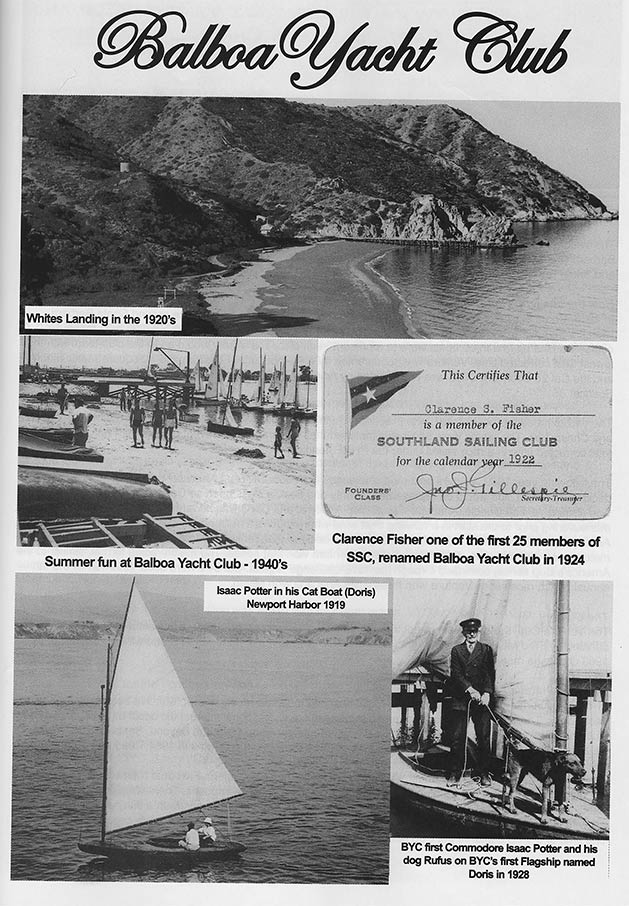