Ten yachtsmen, who in early 1958 put up $100 each, started it all by founding the Bahia Yacht Club, based in minimal leased facilities on the grounds of the Balboa Bay Club. Bahia means “bay,” and was also the name of the boat belonging to the first Commodore, Don Bussey. The initials BYC were the same as an already established club in the harbor, so the word Corinthian was added to avoid duplication of initials. The original burgee, which was the Balboa Bay Club burgee in reverse, was abandoned for the present one when the club was accepted as a member of the Southern California Yachting Association in 1959.

In the early years the club consisted mainly of a very active small boat racing fleet and an enthusiastic group of cruising boats, power and sail. Most BCYC Regattas concentrated on small boats until the idea of racing 10 meters on a boat for boat basis was advanced. Although level racing is commonplace now, it was a daring concept in 1963.

When Pat Dougan entered the Columbia in the 1964 America’s Cup Trials with Walter Podolak and most of the crew from BCYC, the club became world known. The first time in history the west coast had been able to produce a challenger!

A new lease was negotiated giving BCYC members’ full use of BBC facilities, but the expanding membership wanted a new identity. The Orange Coast Yacht Club was invited to participate in a merger to finance and construct a new facility.

OCYC had originated several years earlier in 1964 from a nucleus of 35 yachtsmen and their families who formed this new club with the express purpose of seeking out and acquiring a waterfront site upon which to build a new clubhouse and yachting facility. With the entire membership dedicated to this purpose, the organization was quickly formed under the leadership of Commodore Larry Miller. By laws were established, a name and burgee selected and SCYA membership achieved.

In the next four years OCYC rapidly grew to 150 members and became well established in the yachting community. During this period of growth an active schedule of yachting activities was conducted from four different locations as the club moved from one temporary site to another while negotiations were pursued for various potential permanent locations.

Finally, in 1968 when the opportunity to merge arose, the membership voted overwhelmingly to combine its efforts for site acquisition with that of BCYC in order to take advantage of an excellent site on Bayside Drive for development of a yacht club facility.

A ground lease was negotiated with the Irvine Company and BCYC, now double in size, moved into the location previously occupied by the Richardson Yacht Anchorage. 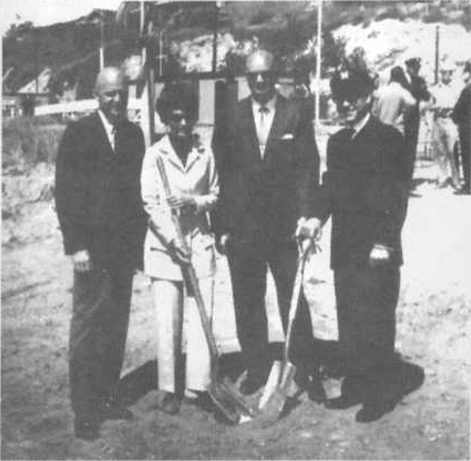 During construction of the present clubhouse, operations were moved down the street and an abandoned restaurant was used for headquarters. The new clubhouse was dedicated in 1971 and has been put to full use ever since.

The ever expanding membership can be justly proud of the facilities and the members who are carrying the burgee, both racing and cruising, to distant parts of the world.

In 1993, an opportunity to purchase the land and marina from the Irvine Company presented itself, and the membership voted to do so. Following months of protracted negotiations, the deal was consummated in 1994.

BCYC Makes Loud Noise In the Past and Today!

if Newport Harbor area residents are concerned about the cannon shots heard resounding across the ray, they need not be alarmed; it is just Bahia Corinthian Yacht Club’s Cannoneer Ely Griswold igniting the cannon to announce their intention to build the new yacht club in the area.

This dream led to the merger of Orange Coast Yacht Club and BCYC, which in turn created the financial foundation and membership depth of experience necessary in the development of a club of this size.

Ground breaking was the first step toward the realization of that dream.

With completion of the 24,000 sq. ft. two story building with on-site parking for 122 autos, a 20’x40′ swimming pool, a basement Junior Room, large locker storage and a snack bar (and provision for additional parking when needed) was added to the property.